GEOFF SHACKELFORD, has it right again!

I know what you're thinking, the USGA has been changing courses free of charge for decades.
But this is actually a program geared toward courses no hosting championships and hosting the everyday golfer. Certainly something like this is a long overdue use of the Green Sectionand of architects, though I do fear for courses receiving recommendations designed to generate pricey re-construction of greens to USGA specs.

What also is missing: the USGA maybe commiting some of its $400 million in reserve to the occassional restoration of a worthy muni. Oh well, a great start...

FAR HILLS, N.J. (Dec. 8, 2015) – The United States Golf Association (USGA) and the American Society of Golf Course Architects (ASGCA) have launched a collaborative program to help publicly accessible golf facilities improve the design and maintenance of their courses and deliver a better experience for their customers.

Combining the expertise of ASGCA member architects and USGA agronomists, scientists and researchers, the program will provide pro bono consulting services to facilities that need assistance to achieve their goal of making  their layouts more enjoyable and reducing their maintenance costs.

“Course design and maintenance form the foundation of a golf facility’s operations,” said Mike Davis, USGA executive director. “With the knowledge that the ASGCA and USGA can offer, more publicly accessible facilities will be able to strengthen this base, while promoting resource efficiency, a better golf experience and a stronger connection to the local community.”

Starting today, facilities can submit an application for the service, which will include an on-site evaluation, professional analysis and a report outlining recommendations for improvement. Recommendations can cover course design, agronomy, environmental stewardship and golf course operations, with the goal of lowering costs while also improving the golfer experience.

“The ASGCA, along with the ASGCA Foundation led by John LaFoy, is pleased to partner with the USGA on this initiative,” said Steve Smyers, president of the ASGCA. “Golf facilities have long benefited from the efforts of ASGCA members and USGA agronomists. Collaboration between our experts will have a positive impact on the facilities we support. ASGCA members are excited and proud to bring their expertise to this program.”

Interested facilities must submit an application by one of three deadlines over the coming year: March 15, Aug. 15 or Dec. 15. The application can be found here.

Canal Shores Golf Course, a community-owned and operated facility in Evanston, Ill., is the first course to receive a pro bono evaluation through the program.

“This has been an incredible opportunity,” said Jason Way, of the Canal Shores planning committee. “We have some great ideas about how to improve the course, but the assistance from the USGA and the ASGCA allows us to get past the initial planning process, so we can move forward with our vision for making Canal Shores a multi-use community green space that the maximum number of people can enjoy.”

Selected facilities must express a willingness to carry out the recommendations from the USGA and ASGCA. Facilities will be expected to track and report the effectiveness of their improvements based on specific metrics.

A video that shares more detailed information on the program and Canal Shores can be found at usga.org via the following link.

The partnership complements the USGA’s course consulting services, which deliver implementable solutions to support a healthier future for golf facilities. In October, the USGA also announced a five-year master research partnership with the University of Minnesota to study and develop solutions to golf’s present and future challenges, including environmental sustainability.

Here is the application page.

Hopefully, these "agronomists" will steer courses away from building USGA greens. In my opinion, the USGA green is a costly mistake and is the highest source of pollution per square foot of turf in the world.

My thoughts on USGA greens:

Armen Suny
Posted by Armen Suny at 5:52 PM No comments:

Join Dave Wilber and Armen Suny as they take a deep dive into the world of job searches and job interviews.
Episoide 10 of The Turfgrass Zealot Project is not short on passion. Dave Wilber and Armen Suny really want you to succeed in your career goals. Handling the job search and the job interview is key to making that happen. Learn some incredible techniques. And be reminded of some very simple things that could put you in the position you want to be in. There's a lot of mistakes being made out there. Don't let them be yours.

Armen Suny's work with Kopplin and Kuebler, an executive search firm, is fascinating and insightful. And you get to hear first hand what is really happening in the trenches from someone who is focused on the world of golf.
Dave Wilber lays on some thoughts about doing it right and paying attention to detail in his opening remarks.

The Turfgrass Zealot Project is brought to you by Klingstone. Proven Bunker Performance for Fifteen Years!
Posted by Armen Suny at 7:03 PM No comments:

Richard Zokol Interview on St. Andrews and the Open 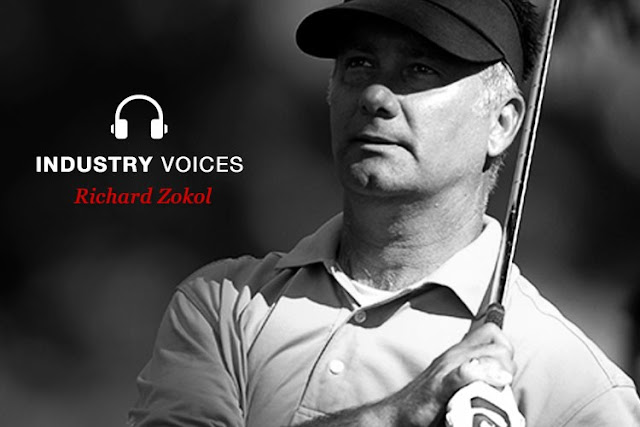 Canadian Golf Hall of Fame member Dick Zokol shares his extensive experience on the Old Course, including one story about Shetland ponies in the Road Bunker that we won’t go into here, Jordan Spieth, Dustin Johnson, Rickie Fowler, Tiger Woods and all things British Open.
To listen to that conversation with Hutch, click below.
Zokol, Open Interview on Golf News Now
Posted by Armen Suny at 10:01 AM No comments:

Yesterday, I was on Turfnet Radio with Dave Wilber, talking design, renovation, fescue greens, US OPEN, executive search, it was a wild ride! 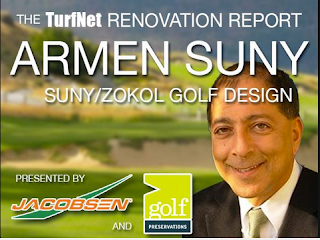 Posted by Armen Suny at 8:54 AM No comments:

The US OPEN is being played at Chambers Bay on a neo-links course which could be called moderately authentic, down to greens that were seeded to fine fescues. The romanticism of links golf with fescue greens will be short lived this week and we'll be hearing more about it as the Championship unfolds.

Why? Josh Lewis, the Superintendent, also known as the Turf Yoda has done an outstanding job preparing the golf course for this Championship. But he has been dealt a losing hand with the selection of fine fescue greens. Fine fescue greens have had little success in North America, when placed in geographic areas that have temperatures that are much higher than the successful fescue greens in European venues normally withstand. St. Andrews highest daily average temperature for the year is 66 degrees, Tacoma averages four months that the average high temperature exceeds 66 degrees. Fine fescue just isn't in its element, no matter how much we wish it would work on greens.

Poa annua, the grass that is the predominant grass on greens from coastal Northern California up through coastal Canada has invaded the greens at Chambers Bay. Not a surprise to anyone that understands turf management. So, now there are two distinctive grass types on the greens with very different growth habits. This will cause putting woes and complaints late in the day, when it will impact greens' smoothness. And if the USGA doesn't listen to the Turf Yoda and they dry the greens down too much, we'll have another 2010 season of majors when course setup becomes an issue. See: Golf Course Setup and Major Championships

These weather charts below graphically demonstrate why fescue greens struggle when climate is not adequately considered.

USGA Greens and the California Drought

With the drought in California worsening, we should all be thinking about protecting our most precious resource, water. Many of you that have read my USGA Greens and The Emperor's New Clothes understand that I think that the USGA green construction method is flawed, in not only its basic concept but in many other ways. But now, I want to address an even more critical element, water demands.

In California and many other parts of the country, golf courses are using low quality water (high salts and bicarbonates) for irrigation. This trend will continue as more focus is put on a higher and greater use (people and food) of water resources, golf course irrigation will necessarily and rightly, be subjugated to use of inferior irrigation water. So now the question is, how do green construction methods affect water usage? Does a USGA green use more or less water than a California green or a High-tech pushup green?

On a recent trip to a desert golf course, the Superintendent was telling me about his flushing of his USGA greens. He was putting what amounted to well over 2 inches of water on the greens to flush the salts out. He may do this every two weeks. Mind you, most of this flushing water is lost, the goal is to force the salts past the "perched" or "false" water table. The USGA green holds water above the gravel blanket and salts accumulate there. They need to be flushed on a regular basis and in areas of the country where rainfall is minimal or drought is occurring, flushing is required to move salts out of the root profile. This USGA Report suggests that flushing (leaching) of greens requires an additional 20% of water. In my opinion, based upon years of observation, flushing may increase total water usage on USGA greens by something closer to 40%. Either way, we, as responsible turf managers should be thinking of ways to reduce water usage.

Well, what if there isn't a "perched" or manmade "false" water table caused by the gravel blanket? Would greens constructed in that fashion require flushing? Yes, they will but the amount of water to keep the salts moving downward and out of the root zone may be considerably less. Anecdotally, I have seen numerous golf courses that are growing the same turf species on USGA greens and non-USGA construction tees and the USGA greens required flushing with 20%-40% more water than their basic demand while the the tees did not require any flushing.

The golf course maintenance industry needs to do some "honest" research and possibly a little soul searching to determine if there is a way to construct greens that use less water.
Posted by Armen Suny at 10:53 AM No comments: