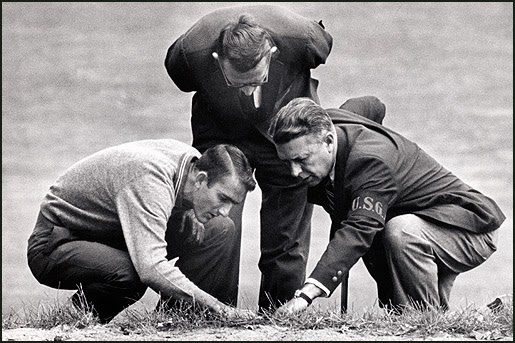 Richard H. Sikes (left), Frank Hannigan (center) and Joseph C. Dey Jr. examine the position of Sikes' ball during the 1963 U.S. Amateur at the Wakonda Club in Des Moines, Iowa. Sikes sought relief from a hole he thought was made by a burrowing animal. He was not granted relief and lost in the championship match to Deane Beman. (USGA Museum)

Frank Hannigan was perhaps the loudest voice of reason in golf. His wit and reasoned, straight forward discourse and writings are going to be missed. He could never have been accused of political correctness. Golf needed him but wouldn't listen.

But I'll also miss Frank Hannigan because he had a profound influence on my career. I met Frank, or Mr. Hannigan as I referred to him in those years, at Merion during the 1981 US Open. Frank needed to see a few things on the course and I was charged by Richie Valentine (Merion's Superintendent) to take him around. Now, in those days the Open was a much more intimate, championship centric event, so that I, as the Assistant Superintendent, got to spend one on one time with Mr. Hannigan, quite an honor.

Based on that little bit of time that we spent together chatting about golf, The Open and Merion, I called on Mr Hannigan in 1984 for a letter of reference for the Cherry Hills Country Club Superintendent position. And now, these 30 years later, I remember well, that conversation. I asked Mr. Hannigan if he remembered me and he said that he did. He asked me what I had been doing since The Open and I told him that I was the Superintendent at Rolling Green Golf Club. Frank got all excited as he talked about what a great golf course Rolling Green was and about the 1976 Women's Open that was held there. Then we talked about the Cherry Hills opportunity and he said that he would gladly write a letter of reference for me.

Well, I got the job at Cherry Hills at the ripe old age of 25 years old and I had no way of knowing what Frank had written in his letter until years later when Cherry Hill's General Manager, Joe Vincent, gave me a copy of the letter. Frank's letter to those of you that knew him was just so typical. I'm paraphrasing a bit; Frank wrote that he didn't know whether or not I could grow grass but that I ran the US Open at Merion.

Over the years, I kept in touch with Frank and we'd run into each other occasionally. Frank would have me laughing at his take on some of my exploits in the industry. I felt that we were kindred spirits, in that each of us stood up for what we believed in and called it the way we saw it. Golf will miss Mr. Hannigan.

Trees and Frank Hannigan: An interesting aside to many of you, Frank Hannigan was one of two men responsible for the tree removal movement, looking critically at the over-planting of trees on golf courses. This movement led to the rediscovery of more varied strategy, better turf conditions, improved vistas, and quite often, a return to the golf course architect's original intent.

Goats and Golf at The Presidio 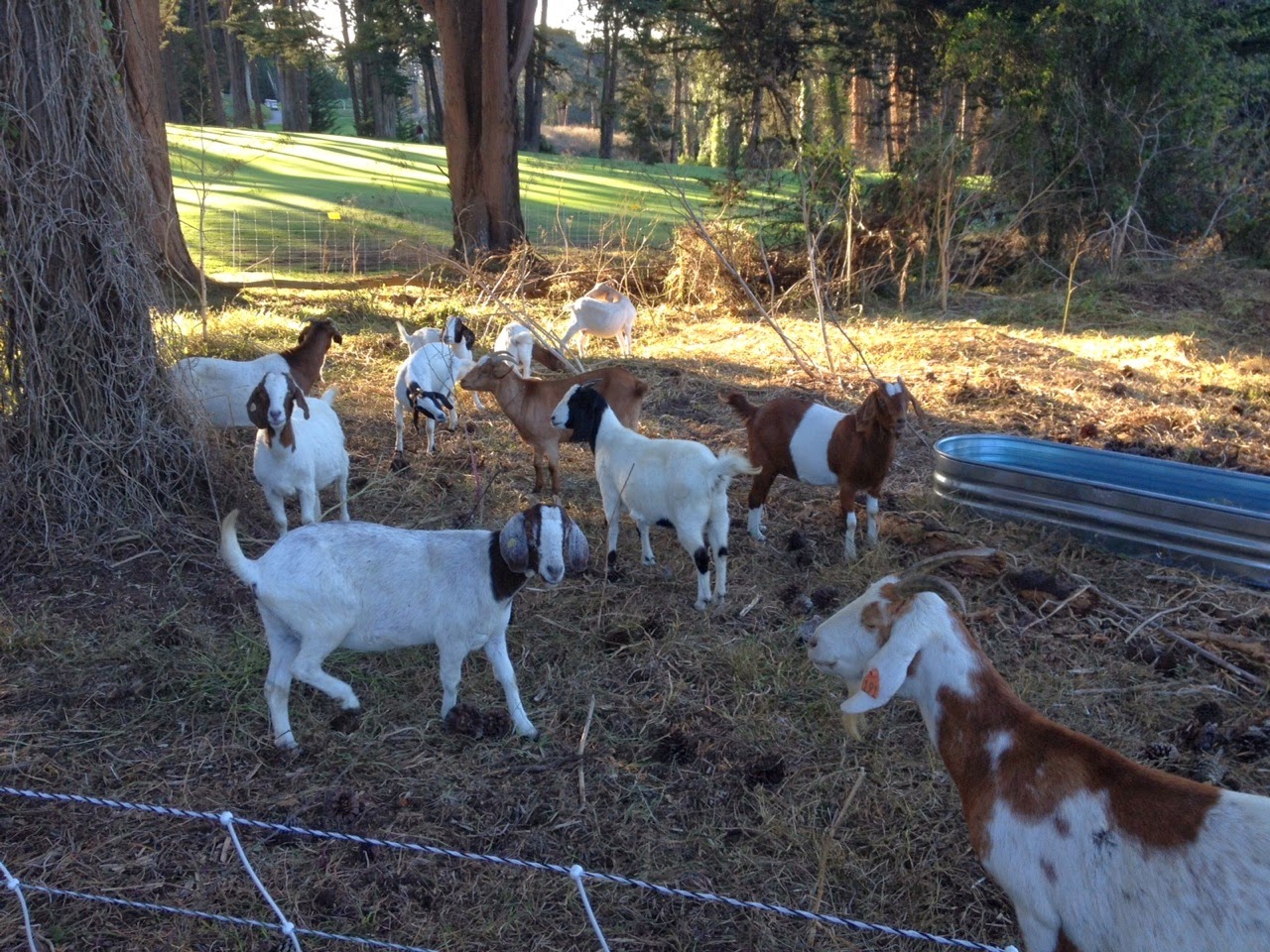 
There are some old goats at working at The Presidio and I'm not talking about Richard Zokol and me working on Suny, Zokol Golf Design's "Era Appropriate Renovation." The Presidio Golf Course has their own herd of goats providing weed control.  And much to the surprise of Superintendent, Brian Nettz, some of the goats were pregnant. 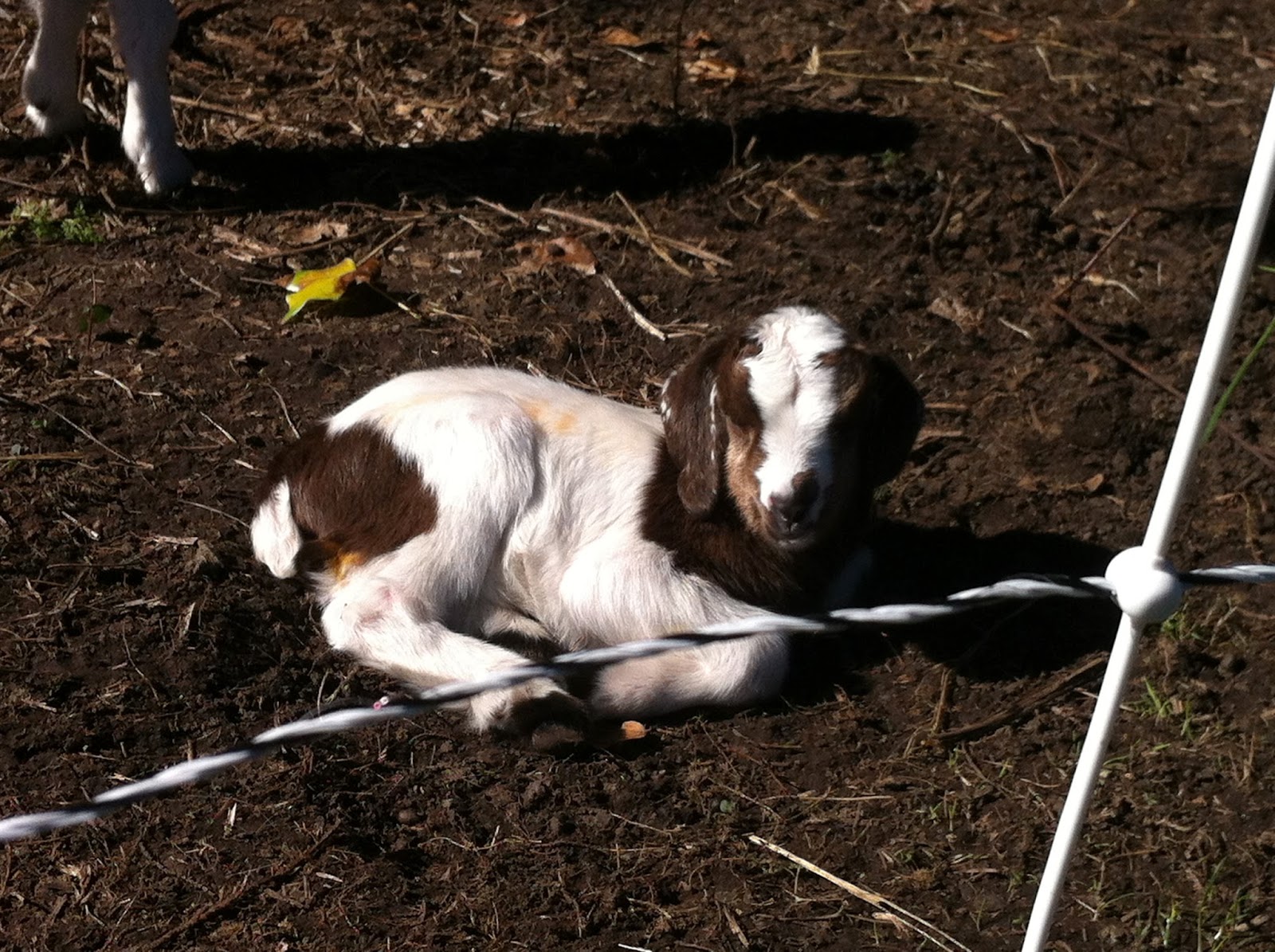 Posted by Armen Suny at 5:16 PM No comments:

Template Holes...the case against them

There are great, earth shattering examples of these  template holes out there and no one debates that but I have a question. How is going back to the well on these classic/historic template holes any different than Tom Fazio repeatedly creating holes with similar playing characteristics and aesthetics for which he is roundly criticized by Golf Architecture's intelligencia? How many of today's Designers are guilty of this design repetitiveness? And don't even get me started on the Tour 18 concepts that may or should cause intestinal discomfort for some of us.

If a designer has preconceived notions about what good is through their love of template holes, one might suggest or infer that they'll go into their default design mode instead of exploring options and possibly finding "new" and different golf holes, nary I say, a great, new original golf hole worthy of template status.