Sketch of the 16th at Sagebrush 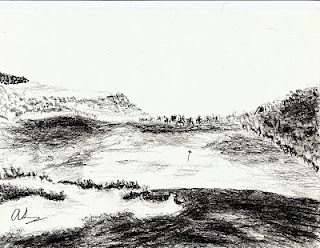 This is a sketch of the half acre green at Sagebrush. There are 5 greens at Sagebrush that are between 13,000 and 22,000 square feet in size. The 18 greens have a total of 198,500 square feet and may be the largest set of creeping bentgrass greens in North America. The  intended firm and fast playability of the golf course and the scale of the property was such that the land screamed for large greens in most areas.
The greens were constructed in an unorthodox method, what may be termed as high tech push up greens or high performance modified greens. Compost and other nutrients were tilled into the soils prior to the finish grade. The greens were all built to accommodate our daily green speeds of 11-11.5  feet and have all pin positions available. The large greens each have two sprinklers in the middles of the greens.
Posted by Armen Suny at 10:20 AM No comments:

“It is rare to find a golf club with a vision as well defined as that of Sagebrush Golf and Sporting Club. But at the heart of every great golf club is a remarkable golf course and what designer Rod Whitman, Richard Zokol and Armen Suny have created in the interior of British Columbia is, to my way of thinking, a step above anything built in Canada over the last thirty years.”
-          Robert Thompson, Golf Columnist
Posted by Armen Suny at 11:48 AM No comments:

Many of you have never heard the term structural bunker. There apparently are no references to it in any golf writings.
The basic types of bunkers are directional, penal, and saving. Any of the bunker types could be strategic or structural. The strategic bunker is obvious and needs little discussion but the structural bunker is another story. Structural bunkers, which are virtually unknown and ignored are used to deal with elevation changes and to minimize earth moving. Any one bunker can be combinations of different bunker types. One bunker can tell you where to hit the ball, directional, save you from running away into trouble, saving, and then after you are in it penalize you with a difficult shot. It can also be structural in that it handled a change in elevation during the construction process instead of requiring more fill or a wall of some sort. 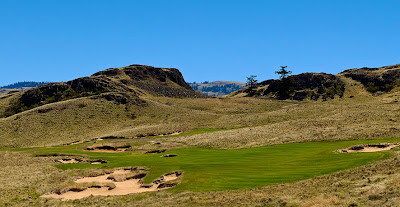 This is a picture of Sagebrush Golf and Sporting Club's 3rd hole. The big fairway bunker on the left was utilized strategically to cause the golfer to think about the dangers on the left side of the hole. It is also the support for a 15 foot fill. As natural looking as it is, its completely man made and allowed us to minimize the fill required to deal with the hole's significant right to left slope. If a structural bunker had not been used the required fill and tie-in would have been substantial and a bit of a force. The look and story from the tee would have been very different. This was a balanced cut and fill. The bunker generated the fill required to achieve the elevation change. This is an aesthetically appealing, golfer friendly, cost effective, solution to one of golf course architecture's challenges.
Posted by Armen Suny at 2:13 PM No comments: