The Presidio Renovation is going very well and this hole represents the halfway point with 9 holes completed and 9 to go. Our mission at Presidio was to create an Era-appropriate renovation. This golf course has been designed, redesigned and altered by so many hands from the greats, Fowler and Simpson to Palmer to various golfing Generals that had "ideas." So, unlike many great old courses, where golf architecture historians can identify a specific period of time when the golf course was deemed to be at its best, the Presidio was in constant flux. Dick and I, along with the folks at Presidio, felt that using Fowler and Simpson and in particular Simpson for our design cues and general concepts was in keeping with and enhancing the property's golf history.

This was a typical look at the Presidio with no real story told from the tee or for the approach shot, We, Suny, Zokol Golf Design, tend to favor visuals to help tell the story or to help the golfer generally identify the strategy or better yet for them to develop their own unique strategy.

Take a look at the front bunker in the before and after pictures. The bunker in the before picture was a green-side bunker, in the after photo, that bunker is some 25 feet in front of the green. This is simply a depth perception manipulation that we used to create a subtle challenge to the golfer that knows the yardage but looks at what is perceived as a green-side bunker that is actually much closer. The green was enlarged by almost 1,500 square feet and extended to the players' right with some great pin placements. A false front was added to allow players to "see" the green from the fairway. Short grass is being added around the back and right side of the green. We can't wait to see how the golfers react to the finished hole and we're looking forward to the next nine holes!
Posted by Armen Suny at 10:48 AM No comments:

William Flynn on the Ball and Course Length 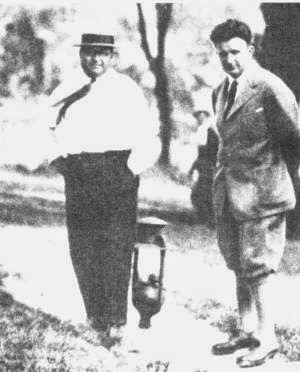 
Growing up in Philly, I was a Flynn fan before anybody started talking about him. And, having worked at Merion for Richie Valentine whose father, Joe Valentine, was Flynn's construction foreman and successor as Superintendent upon Flynn's departure, I heard all of the Flynn stories along with some pretty good Dick Wilson stories. But, what I wanted to document in this post, was just how forward thinking Flynn was.

Here are his thoughts from 1927 on the ball and length of holes and golf courses.


Again the question of the ball has a great bearing on what type a certain length hole will be. Time was, and not so many years ago, when a hole 400 yards long on average ground was a good two-shot hole for the star players; now, the same hole is perhaps a drive and spade for the better class golfers.

In view of this the architect of today plans his full two-shot holes from 440 to 500 yards, depending on the character of the land and if the distance to be obtained with the ball continues to increase it will be necessary to increase the length of all holes on golf courses accordingly if the same standards of play are to be maintained.

All architects will be a lot more comfortable when the powers that be in golf finally solve the ball problem. A great deal of experi- mentation is now going on and it is to be hoped that before long a solution will be found to control the distance of the elusive pill.

If, as in the past, the distance to be gotten with the ball continues to increase, it will be necessary to go to 7,500 and even 8,000 yard courses and more yards mean more acres to buy, more course to con- struct, more fairway to maintain and more money for the golfer to fork out.