Memories of the Last OPEN at Merion 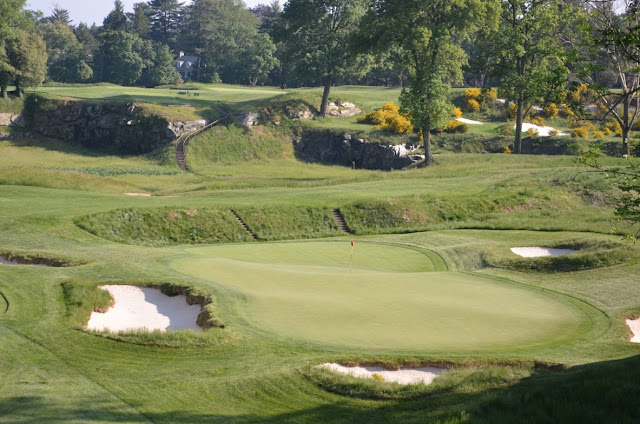 As a tribute to Merion Golf Club, I will reflect on my memories of the behind the scenes events that happened far from the television and press coverage during the 1981 U.S. Open. In 1980 and 1981, I was the Assistant Superintendent at Merion. Please keep in mind that these are my memories and they may be slightly flawed based on a misspent youth and adult career in the golf business. All of this from the only man west of the Susquehanna River that can make a wicker.

Let me start with a fun one, that every golfer has an opinion about, pin placements. Even in those days, Merion's resistance to scoring was being questioned. With that in mind, it came down to how firm and fast the greens were, how tough the pin placements were, and how tough the rough was. Fairway widths were little changed for the Open with the widths ranging from 26 to 32 yards wide in the landing areas. So, to us on the golf course maintenance side of things, with our fearless leader Richie Valentine (Merion's 3rd Superintendent who took over from his father who had taken over from Flynn) at the helm, we thought that we were the last defense of protecting the course and club from an assault. We considered it a personal affront that some player, no matter how great, would tarnish the reputation of Merion.

Well, the course's defenses were compromised by the weather with heavy rain falling on Monday softening the greens and I remember very clearly Richie Valentine's diatribe about how easy the pin placements had been on both Thursday and Friday, which had led to low scores. Richie was not bashful and could elucidate with the best of them and he had done so at the club's US Open committee meeting (held in a motor coach in the parking lot) on Friday afternoon. The General Chairman, Bill Kent,  ran military like rap up sessions at the end of each day. At the end of the meeting he asked if anyone else had anything to add. Much to the chagrin of the Mr. Kent, Richie Valentine said "When are you going to tell the USGA to set some tough pin placements because if you don't then I'll set them myself." At that point the committee erupted in cheers and one of the women, I think it was Mrs. Bone, said "Why, you tell him Richie, we have tougher pin placements for the ladies member guest" and her comments were accurate. Merion's members were more apt to complain about a banal course setup than an interesting, tough setup; they knew golf, still do for that matter.

The setup that Richie was complaining about was being dictated by one of golf's all time great characters, P.J. Boatwright, Jr. of the USGA. I remember being on the 17th green on Saturday morning with Billy Buchanon (USGA Championship Agronomist) measuring green speeds with Richie Valentine watching us when P.J. walked onto the green puffing his pipe and said to Richie "I understand that you think that the pin placements have been too easy" to which Richie responded "You're damn right P.J." With that P.J. puffed on his pipe and said "I think you'll find them a bit more to your liking today." and we did.

A Chevy Nova drives across two greens on Saturday morning of the Open
How fast did 17 green get?
David Graham and his Wicker