David Graham's Wicker from his 1981 US Open Victory 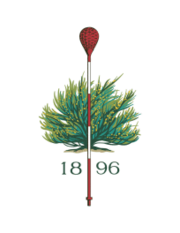 In 1981 after David Graham had won the US Open, Richie Valentine, Merion's Superintendent, had me ship a wicker to David Graham. The article below appeared in one of the Philadelphia newspapers after the Open. 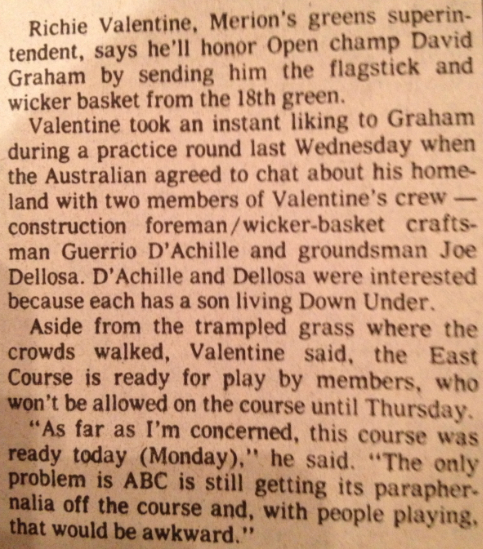 Years later, I got to know David a little bit and I was able to tell him about sending his wicker to him. It wasn't much longer after that, that David called me about getting Guerrio D'Achille to make some wickers for a 36 hole golf course that he and Gary Panks were building in Australia. Ultimately the club chose not to use wickers but it gave me a chance to visit about Merion with David again.

In the winter of 1980-81, I learned how to make wickers when we made a new set of wickers for The Open. The wickers were made from rattan that Guerrio softened to the right consistency with a steam cleaner. We used an 8 foot tall aluminum flag pole turned upside down, moving the ferrel to the bottom and attaching the basket to the top and a common funnel snugged the bottom of the basket to the pole. Wickers are in Crimson and Tangerine. And remember wickers don't show which way the wind blows.

Probably more interesting though is that the old wickers were all different heights. The set that was in use up until the Open ranged in height from 6.5 feet tall to 8 feet tall. The wickers were picked up every evening to prevent theft and replaced each morning as we did course setup. And as the guy that did that course setup most days, I created optical illusions as to the hole position on the greens by using different length poles for different effects. A short pin in the front of the green looked to be much deeper.

Everything about Merion was and is just a little bit different and more than a little bit original, hopefully this Open will be too.

Pray for good weather this week!